Title
From Alex Dimitry to P.G.T. Beauregard, 1861.
Creator
Dimitry, Alex
Abstract/Description
Alex Dimitry writes to P.G.T. Beauregard and pleads for the release of the body of Colonel James Cameron, U.S.A.V., for the purpose of burial. Colonel Cameron, a fallen Union officer, was killed during the Battle of Bull Run. The General remained unmoved because Alex Dimitry had abandoned the Confederate cause. General Beauregard's verdict, "I listen to no appeal from a traitor to the land of his birth." 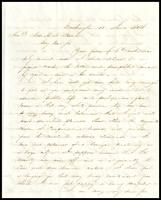