Title
Front page of Philadelphia edition of The Evening Telegraph, April 4, 1865.
Creator
The Evening Telegraph
Abstract/Description
Front page of the Philadelphia newspaper The Evening Telegraph from April 4, 1865 with articles regarding victory of Grant near Burkeville, the release of General McLaughlin and the Union prisoners held at Richmond, Virginia, the rebel evacuation of Richmond and how rebels blew up their forts, dams and set Petersburg on fire before leaving. News of the capture of Petersburg and Richmond by the Union was relayed by a telegraph dispatch from General Wietzel. 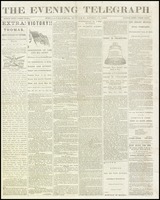